For the Sins Of Your Ancestors

A Throne of Your Own

Xaba is a Lu-Qiri who was freed the Plane of Ashes alongside her former master Yobhan. She became loyal to Talon when the woman showed her kindness, which Xaba had never experienced before.

Xaba was mastered by Yobhan at some point in her life and willingly entered the Plane of Ashes alongside him, where she was trapped for hundreds of years. A child died in the Plane and it was thought that Xaba was the murderer and was viewed as untamable and a beast. She was often abused by Yobhan who treated her with cruelty and anger.

In This Is Our Outpost, Xaba freed from the Plane when Talon opened the portal alongside her master, Yobhan. After the battle against the Prime Order they would go on to take control over the Outpost alongside Zed and all the other Lu-Qiri and Blackbloods freed.

In For the Sins Of Your Ancestors, Xaba is among the Lu-Qiri used by Yobhan to keep the residents of Gallwood from escaping. At night during confrontation Zed has with Yobhan, Xaba screeches on a walkway near them to alter her presence showing her support to her master.

In Kill the Rat, Kill the Kinj, the leaders of Gallwood Outpost discover that a rouge Lu-Qiri is feeding on humans who are being sacrificed to it by a fanatical cult that worships Lu-Qiri as gods. Zed realizes that it must be Xaba, as she was freed from Yobhan's mastership after his death and must be lost. He recommends killing her as she is a "lost cause". Instead of listening to Zed, Talon decides to try and master her. Their first meeting is violent, though Xaba spares her life instead of killing her. Rethinking her approach Talon then decides to use kindness to tame Xaba. Later that night Talon brings a peace offering to Xaba and saying that things will be different now that she belongs to Talon, and these actions and words ultimately let Talon masters the creature. Xaba is once again called by the cultist using the ring of Yobhan. Xaba then frees Warlita, who is the latest victim used as a sacrifice by the cult members before knocking aside the lead cultist. Before Xaba can do anything other than let out a loud screech, Talon appears and tells her to stand down. Xaba then spares the cult members' life which Talon views as amazing since it is difficult for a Lu-Qiri to show restraint. Talon also keeps the ring that calls Xaba but allows her to roam free until she needs her. 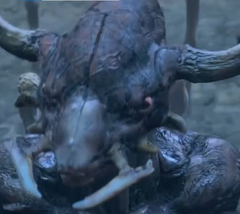 In Go Ahead and Run, Xaba is among the Lu-Qiri who are called upon to deal with the Prime Order soldiers. Xaba hits one of the soldiers across the court before Janzo tells Jaaris that they can't win. Jaaris then reveals that he is in possession of Kultorkinj before using it on the Lu-Qiri and then the residents of the outpost. Xaba and the other two Lu-Qiri then leave before any of them can feel more of the Kultorkinj's power. Later, Janzo uses the Lu-Qiri rings in the same clearing where the cultist summoned Xaba before. He introduces himself and tries to explain the situation to them before asks the Lu-Qiri to help bring food for the imprisoned Gallwood residents in the tongue of the Blackblood and they oblige. Before Xaba leaves though, she gives Janzo a menacing stare. Whether this is because she is reluctant to obey him, or because he stated that he is an ex lover of her master is uncertain. Later on, when Janzo and Munt come to the clear to collect the food, Xaba drops some sheep and can be seen climbing up the wall to resume her hunting activities.

In Violence is FutileTalon is trying to handle another Lu-Qiri named Ketma in the throne room to no avail. When it seems like that Ketma was going to kill Talon, Xaba breaks through one of the widows to protect her master. The two Lu-Qiri fight each other until they throw each other out another window.

In Someone Has to Rule, a drunken Talon gets ambushed by an unknown assailant on her home. Because she can't properly defend herself, she blows on Xaba's ring to summon her. Unfortunately, she doesn't appear. The next day Zed ask Talon about Xaba, to which she tried summoning her but Xaba never showed up. Zed response by saying that Vikka, left the Outpost as well. Later by the river, Talon and Wren she a bunch of Lu-Qiri walking away from The Outpost. Talon blows her ring again, but nothing happens.

In A Throne of Your Own, Talon and Zed have tracked a group of Lu-Qiri harassing a bunch of humans. They blow their rings to which the Lu-Qiri hear and turn to face them. Xaba immediately kills one of the humans, despite Talon's protest.

Xaba is a harsh and brutal Lu-Qiri who is a product of the environment she endured for most of her life. She was abused by Yobhan who treated her with an exaggerated form of cruelty to keep her in check, which made her equally as cruel and violent. She has no impulse control and doesn't hesitate to attack others given the chance. While masterless, Xaba killed several humans, and even ate one, who were sacrificed to her by a cult as she didn't know any better. Zed referred to her as a lost cause, but Talon refused to accept this fate and treated Xaba with kindness. Xaba responded well to this and became loyal to Talon and showed mercy for the first time when she spared the life of the cult members. When Talon was being attacked by another Lu-Qiri, Xaba wasted no time in protecting her master. This shows that not only Xaba being loyal to Talon, but even that Xaba does care for her master. However, upon the awakening of The Seven, she returns to her brutal and murderous nature.

Xaba has a usual appearance for that of a Lu-Qiri, with her grey skin and demonic appearance. When she is first, her skin is light gray similar to that of the other Lu-Qiri's, however, the shade deepens overtime. 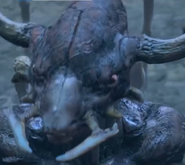