Where Death Lives is the twelfth episode of the third season of The CW's The Outpost. It aired on December 27, 2020.

IT HAS BEGUN - Talon and Zed learn painful truths about their relatives. Tobin makes a heroic rescue and Yavalla's horde grows as the Outpost prepares for battle. 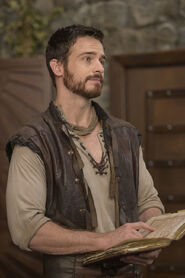