The Outpost Wiki
Register
Don't have an account?
Sign In
Advertisement
in: Characters, Resident of Gallwood Outpost

Where You Go, People Die

Warlita is the dutiful and loyal handmaiden of Queen Rosmund. When Rosmund left the Outpost, Warlita felt useless as her mistress left with her. To help her, Munt offered her a job as a barmaid at The Nightshade Inn where she continued to work even after Rosmund's return. When Falista Relman became queen, Warlita returned to her duties as a handmaiden, serving the Queen of the Realm. She would occasionally go back to working for the Nightshade Inn during the rise of The Seven, and then back to being a handmaiden. Only to serve Queen Talon, after being a bridesmaid at the wedding.

In Kill the Rat, Kill the Kinj, Warlita struggles to find something to do now that Rosmund has left the Outpost and Warlita is no longer a handmaiden. She confides in Munt and they discuss Elinor Chadwick for a moment. He offers her a job as a barmaid since the Nightshade is both his and Janzo's. She agrees happily but is disheartened when she and Munt are tasked by Janzo to catch rats for his experiment. While on the hunt, she finds a woman's hand shackled to a chain and a symbol burned on the wall behind it. She screams but seeks comfort in Munt. One her first day working as a barmaid, Janzo comments that she is a good person to help around the place. Warlita is later taken by that same cult who wants to sacrifice her to Xaba, a masterless Lu-Qiri the cult views as a God. The cult is ultimately stopped by Garret Spears, Munt, and Talon. Warlita seeks comfort in Munt but returns to work the next night as scheduled despite his deep concern. When alone, Talon tells Garret that she thinks Warlita and Munt are good together romantically.

In Dying Is Painful, Warlita is ogled by Jaaris who has taken over Gallwood Outpost. He wants to see Warlita but Munt interferes as he is doesn't want Warlita to be harmed. Jaaris responds by using his Kultorkinj to inflict pain on Munt. Warlita shouts in protest and agrees to stay with Jaaris if he stops hurting Munt. He agrees to the terms and Warlita can be seen feeding Jaaris berries and being near him throughout the rest of his reign. When the residents take back the Outpost, Warlita stands next to Munt.

As described by Munt, she is very good at being caring sweet lady to all, even those that she finds disgusting. A kind woman with a caring heart, Warlita is loyal to Rosmund and believes it is her honor to serve the Queen. She didn't hesitate to take Rosmund's place while the Queen snuck away to visit Tobin, showing bravery and loyalty that is unmatched. Despite being brave there are times she has succumbed to fear and has little experience fighting. Like the time she was captured by fanatic cultist or serving Jaaris food. She takes her job seriously and is proud to be working. Either as a barmaid at the Nightshade or as a handmaiden to the queen she takes great pride in it. This can be seen when she was the only one managing The Nightshade Inn, and was complaining that Garret and Tobin that they were destroying the Nightshade during their brawl. However, her inability to fight became evident when she didn't physically stop the fight.

While she doesn't believe that she is a woman of high status, she does hold herself in high regards. A good example is shown when talking to Munt about some of their duties/chores she says while she doesn't enjoy hunting rats, she has washed chamber pots and pans (something which Munt hasn't done, nor would she recommend it). She is also not shy to show off her beauty around The Outpost. While she doesn't ignore the comments from the residents about her, she is extremely sensitive to the words and touching of Jaaris.

Warlita is a beautiful young woman with long blonde hair, an oval-shaped face, and bright blue eyes. She dresses in darker toned dresses that have lace around the collars, and a long yellow-brown cloak that many recognize her by. She bears enough of a resemblance to Rosmund to pass as her momentarily.

Warlita and Rosmund have grown closer over the time that Warlita has served her. Originally, Rosmund has reservations about having another handmaiden after the betrayal of her former handmaiden. They eventually became friendly, with Warlita proving that she cares deeply for Rosmund's well-being and has a knack for helping the Queen with anything she needs - even at her own safety. After Rosmund had been freed from The Hive control, the two woman remained friends till Rosmund's death.

Warlita has romantic feelings towards Munt following the time they spent together at The Nightshade Inn as co-workers. He was part of the team that rescued her from a fanatic cult and she was extremely grateful, even hugging him. These feelings are expressed further when she stopped Jaaris from harming Munt with his Kinj by agreeing to serve him. Every time Munt tries to reassure her or comfort her after a traumatic experience, she is shown to be relaxed in his arms. When Janzo returned from his mission without Munt, she was extremely worried and sad. She gave Janzo a hug after hearing this news. Both as a way to comfort each other, and because she needed someone to replace Munt's arms. Munt tried to go all fancy on her when out on a date, only for him to make a complete fool of himself. After heavily drinking the next day, Warlita says they next time they should just have simple things on their date. When Munt was injured during one of the against The Seven, Warlita was so worried for him. So much so that she was willing to do all the work in the Nightshade even after he had fully recovered. While evacuating The Outpost for the final battle against The Seven, Munt decided to stay behind to not only watch over his little brother, but to also avenge the death of King Tobin. This causes Warlita to kiss him for the first time and makes him promise that he will return to her. After The Seven were defeated, the two officially became a couple. After the wedding of Talon and just before her crowning Warlita ran up to Munt and kissed him for a second time. Talon believes that Munt and Warlita look good together, and compares them like her and Garret Spears.

The two women have a good friendship. While originally having very little interaction while Gwynn was still alive, they became more acquainted after Warlita had been rescued from a fanatic cult that worshipped the Lu-Qiri, Xaba. Most of the time however was small talk while Warlita was serving drinks at The Nightshade Inn. During the awakening of The Seven and Queen Falista Relman short reigned, the two woman would often be worried about their significant other and vice versa. During the wedding of Talon and Garret Spears, Warlita was a bridesmaid, and would later on serve as a handmaiden to Queen Talon, while also working in the Nightshade Inn with her boyfriend Munt. 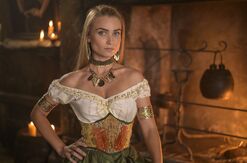