Violence is Futile is the thirteenth episode and season finale of the third season of The CW's The Outpost. It aired on January 3, 2021.

IT HAS BEGUN – The Outpost becomes overrun and Talon and Zed return with an unexpected ally. Facing total defeat, a sacrifice is seen as the only hope.

A flashback to four months ago is shown. Yavalla confronts Sai-vek Redwan who threatens the group as he will kill them if they come near him. She is adamant on obtaining the box, leading to a fight between Yavalla's men and Sai-vek. The men impale Sai-vek which ceases him from being able to defend himself. She hammers the stakes into his body to keep him from ever moving, as punishment for not handing over the box. Corven believes he's found it but Sai-vek warns him against opening it. When he does, a snake lunges out and bites Corven's hand. He grabs the box and gives it to Yavalla, though the snake's poison is fast-spreading. Sai-vek warns her that the contents is a curse and will bring death to everything - even her. She leaves with her men except Corven, whom she leaves behind. Sai-vek attempts to reason with Corven to set him free but the man refuses and leaves. Sai-vek screams out in protest.

In the present day, Corven reminds them that Sai-vek is death. Talon is surprised that he's still alive but he knows because he's cursed. She knows he has the Terakinj but he doesn't know who they are. She removes the spears from Sai-vek's body against Corven's advice. Zed explains that they are from the green world and need the Terakinj to stop Yavalla, who has unleashed The Hive on the realm. He refuses to believe that his wife opened the portal and Talon explains that his wife is dead and that the woman passed the kinj to Talon. He is relieved that Talon is still alive and asks if they know her. She introduces herself to him and he is overcome with emotion over meeting his daughter.

Back in the green world, Falista is heartbroken over the death of Tobin and is joined by Gwynn. She blames herself for Tobin's death as he only came back for her. She tells Gwynn that Tobin loved her not Falista, and tells her of Tobin's last words. She tells Falista that Tobin told her that he loved Falista. They bond over their mutual love for the man they loved. Falista admits that she still can't control the kinj so she won't be of any help to Gwynn.

The royal army holds off the Hive members, including Munt and Warlita. Munt tries to sway them by claiming that Gwynn would rather everyone die then make peace with Yavalla. The Hive surrounds Gallwood - sixty-thousand give or take. Yavalla walks through the land and is disappointed that Gallwood is the last place alive. She claims that Rosmund doesn't care if her people die.

While in the Plane of Ashes, Sai-vek explains that the Terakinj, or terakinj as it is called, will destroy anything and everything that he touches including the kinj inside people. He is willing to help them kill Yavalla but refuses to pass it to anyone as he's taken too many lives. He won't have anyone else die because of him, including Wren would offers to take the Terakinj. He explains that the two kinjes destroy each other and the hosts bodies. The Vortakinj has a steel grip on the mind that carries it, so the host will not willingly surrender the kinj. Zed offers to take the kinj but Sai-vek refuses to burden anyone else with it. He knows he'll heal but he needs water as he's thirsty. The water will also help him heal faster. Everyone leaves to fetch water so Talon and Sai-vek can speak.

Gwynn explains the effects of the United to her gathered people, as her mind and body withering away. The troops agree and refuse to surrender.

She and Garret convene in the throne room where she admits they don't have a chance. But she is glad that he's with her in the last moments. He refuses to give up on Talon but she reasons that there are too many ifs in their plan. She refuses to run away as there isn't anywhere to run. He is adamant that they'll find a way and this wont' be the end.

Talon asks her father if he's given up on living which he has, from the moment he got the curse. He compliments her strength, though she's angry that he left in the first place. She explains that the entire village was slaughtered and he apologies. He didn't want to leave but the Prime Order were collecting kinjes, so he was tasked with saving a Dragman. The Dragman passed him the Terakinj and he knew that it wasn't safe for him in the world - he couldn't bear to kill anyone.

The war starts as Yavalla commands that they kill the Queen. Janzo throws rocks, Garret commands fleets, Gwynn protects hereslf, and Falista finally learns how to channel her kinj properly by using her hands. She points at those she wants to target and incapacitates them and only them. She screams and unleashes a wave of kinj that kills everyone near her. But seconds later, an arrow shoots her stomach and she falls. Janzo sneaks away to get things from his lab until the kinj can heal her.

He makes it to the Nightshade where Munt is staring at a picture of their mother. He tells her how much pain he's in over her death and from the kinj in his head. He hears Janzo's lab door close.

Sa-ivek catches Talon up on his life in a short sentence, then asks her about her life. She opens up about living from town to town and not trusting anyone. He recognizes her mother's fighting spirit in her.

Janzo is infected!! Garret knocks him out after Janzo hits Falista with a rock over the head, hoping to kill her and the kinj.

Corven refuses to return with them to the green world as Yavalla is still there. Zed promises to return when they fix things there. They arrive in the Outpost and Sai-vek protects Gwynn, but unfortunately, Garret is passed a kinj. Yavalla summons her Lu-Qiri to her side when she sees that Sai-vek has come to the world. Wren threatens to kill herself rather than join Yavalla. Garret and Zed fight. Xaba saves Talon from Ketma. Yavalla offers to let Wren walk away free in exchange for not infecting her. She doesn't want Wren to kill herself. Janzo ultimately infects Wren. Zed is surrounded by Hive members who are willing to impale him at the command of Yavalla. Sai-vek is impaled and they can't free him. He passes his kinj to Gwynn and then dies seconds later. Gwynn knows they'll figure out who will rule the realm once she's gone.

Talon kills all the guards who try to stop them so Gwynn can get to Yavalla and kill her. They use their kinjes to destroy one another, and they turn to stone then ash. The kinjes fly to the air and return to an ancient temple.

Falista is alive. The realm bends the knee to Talon, who they recognize as their new leader - humans and blackbloods alike.

Two and Three watch over Gallwood, with Two remarking that the residents of Gallwood have awakened the old ones. The kinjes soar past them and into an ancient temple miles away from Gallwood, where they enter the tombs of enclosed creatures. The kinjes enter the temples of the creatures head, traveling to the forehead, before they open their eyes. 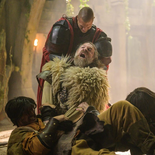