The Outpost Wiki
Register
Don't have an account?
Sign In
Advertisement
in: Characters, Deceased, Member of The Bones

Leader of The Bones

One Is The Loneliest Number

Tiberion Shek was a mercenary and member of The Bones. He, along with his fellow mercenaries, was responsible for the annihilation of the Blackblood race and death of Talon's family.

A group of mercenaries, known as the Bones, attacked a Blackblood village under orders to ensure that every Blackblood died. Tiberion Shek was among the group. They lit the camp on fire and then slaughtered every villager. One of the men went to attack a young girl with an ax, but her mother sliced his leg, which angered him, and he killed her while the child ran away. After the smoke cleared, Shek checked each of the corpses to ensure that all of the Blackbloods were dead.

In "Strange Bedfellows", Everit Dred called a meeting with Tiberion Shek, a mercenary who helped with the slaughter of the Blackbloods. Dred informed Tiberion of Toru Magmoor's death, which Shek wasn't unpleased to hear about. Dred then told him Toru's dying message, "tell Dred one remains" and Shek pieces together that Toru meant one Blackblood. Shek insists that it's impossible, as he checked all the corpses himself. Dred has no patience for Shek's claims. He told him to gather the Bones and ride for Gallwood Outpost. Shek wanted payment, and Dred coldly told him that their price is not suffering an unimaginable slow death at the hands of the Inquisitor. Shek then agreed and left the camp to gather the Bones.

Shek was a cold and merciless man with no regard for life. As a contract killer, his morality swayed easily. He is responsible for the slaughter of dozens of innocent Blackblood people. He also killed The Smith when he stood in the way of Shek completing the Bones' mission of eradicating all Blackbloods. 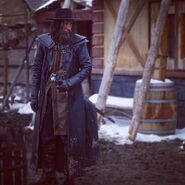