The Key to Paradise

The Key to Paradise

The Key to Paradise is the fourth episode of the third season of The CW's The Outpost. It aired on October 29, 2020.

CHOICES - As Talon presses for answers, Yavalla recruits Gwynn for her cause. Reunited with a past love, Tobin faces a difficult choice. Lastly, Zed's loyalty is tested.[1] 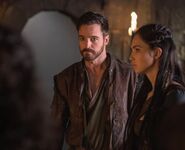 The Outpost Season 3 Episode 4 Where is Garret Spears? Scene The CW