The Gods Thank You is the third episode of the fourth season of The CW's The Outpost. It aired on July 29th, 2021.

A GIFT FROM THE GODS -- Garret is set free but must serve a new ruler. Talon and Zed return to save the Blackbloods but discover a tragedy. Falista tries to make peace. 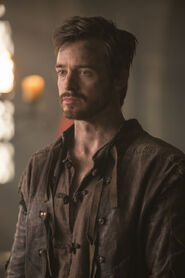