Octor is a popular table-top card game played by many across the realms.

In "Strange Bedfellows", Gwynn and Talon play Octor at The Nightshade Inn. Gwynn introduces Talon to the table and game. Talon later bluffs her way into winning, having lied about not knowing how to play the game. She hustles the players and ends up with almost double the money.

In "The Colipsum Conundrum", a disgruntled Gwynn tells Calkussar that her new handmaiden, Naya, can't even play Octor. Calkussar and Gwynn then sit down to play cards together.

In "This Is One Strange Town", Talon brings Gwynn to The Nightshade Inn to play Octor with her in the hopes it would cheer Gwynn up. They talk as they play and Talon realizes she's won the hand. She asks if Gwynn purposely lost, but Gwynn claims she didn't.

In "Not In My Kingdom", Tobin wants to play Octor with Gwynn. They decide to make a bet after Gwynn dismisses his idea of strip Octor. If Gwynn wins she gets his army without the condition of marriage. If Tobin wins she’ll agree to marry him. He turns down her offer because a gentleman should never play for those stakes with a lady. Gwynn begins to shuffle and deal and he makes a comment that the man usually deals Octor, but Gwynn tells him, “not in my kingdom”. The game ends in an argument and Gwynn wins.

Each Octor card has symbols and colors. There are six colors and five symbols. The dealer deals the cards. At some point during the game, players can trade in the cards they don't want. After getting a new number of cards (max five) players can place their bets. Upon placing bets, a player can "flip" and down their cards which stops the hand from playing. A full suite is when a player has all of the same colors in their hand. When the game is over, the winner doesn't have to show their hand under "winners privilege".

There are six colors: deep blue, red, light blue, green, purple, and light green. There are five symbols printed on the cards. The only known symbols are a candle, an hourglass, and a wheat wreath. 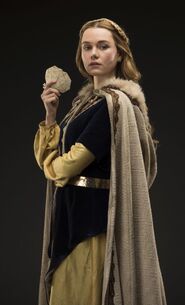