The Outpost Wiki
Register
Don't have an account?
Sign In
Advertisement
in: Characters, Resident of Gallwood Outpost

Two Heads Are Better Than None

Munt is the brutish adoptive son of Elinor Chadwick and the adoptive brother of Janzo. Following his mother's death, Munt becomes the co-innkeeper of the Nightshade Inn. He once did whatever work Elinor asked of him - even if it entails hurting another. His willingness to do whatever she or Janzo says stems from a deep love for them.

Munt was presumably orphaned as a young boy, which is why Elinor Chadwick adopted him. He was raised to do her bidding and listen to what she said. He grew up alongside Janzo and Bill, and views them as his brothers. He was loyal to Elinor and employed through her for most of his life.

Although seemingly unintelligent, Munt is loyal to Mistress and his adoptive brothers. There are times though when he can be smart, insightful, and helpful. He offered advice to Wren about her feelings towards Janzo, and helped Tobin comes to terms with marrying Falista. Munt is physically intimidating but not emotionally impeding, instead, he is rather jovial and light-hearted due to his lack of overall intellect. Following his mother's death, Munt allows himself to be more outgoing with his affection as he no longer must conform to his mother's standards. He enjoys giving hugs to people, whether they want one or not, especially with those he calls family. His playful nature shines through in moments of low-stress. He can be reluctant to trust others, usually waiting for Janzo or Mistress to tell him someone can be trusted. Munt is the most loyal of Elinor's adoptive children and has become conditioned to accept whatever she wants out of him. His fear of Greyskins and anything unknown is his biggest weakness. He also hates science and anything to do with big fancy words. However, he will help his little brother with whatever experiment Janzo is working despite his own distaste. A good example would be when he had to carry some Plagueling outside during the day. This made him very uncomfortable, especially when he was handling the female one.

Munt is often tasked with the more unpleasant activities in Gallwood, such as burying the bodies of fallen soldiers after the Prime Order attack. While he doesn't often express his negative emotions, he was heavily affected by the burial of more bodies than he could count and admitted to Tobin that he doesn't want to do that again. He wanted peace, even if it meant having to rely on the Blackbloods to achieve it. His mind was changed rather quickly when Tobin promised him that he would be seen as a warrior, leading Munt to experiment with different names for himself.

Munt has a greasy and hulking appearance, as he is impressively physically fit. He has stringy black hair with a white beard to accompany his almond-shaped brown eyes. He wears bulky clothing that accentuates his tall and muscular physique. However during seemly important meeting, he tries to dress up fancy (only to ironically dress up flamboyantly). He can be considered physically intimidating, as he was able to lift a grown man up with his arms. Whenever he goes outside the outpost, he can be seen wearing additional fur pelts. This is either because he becomes cold easily, or because he is simply caring extra.

As Elinor's adoptive son, Munt cared deeply for the woman and called her mom. He helped her on multiple occasions and often did her "dark deeds" without question. His lack of intellect often bothered her, and she belittled him often, which he didn't always understand. Mistress cared for him but didn't show him, maternal love. Instead, she treated him more as a servant than a son. He was happy to obey her orders and do whatever it was she asked of him. He adored her and believed everything she told him. When he witnessed her death, he was overcome with emotion and took his anger out on the Prime Order soldiers that were responsible for her death. Even after her death, he works to preserve her memory in the people around him.

Janzo and Munt are adoptive brothers. Munt is fiercely protective of his youngest and only living brother, Janzo. They weren't always close and often had a bickering dynamic due to the influence of their controlling mother, who demanded the best out of both her children. Munt often doesn't understand Janzo's intellect, leading him to call Munt an "idiot", though some of his more recent ideas have proved helpful in finding a more logical conclusion to Janzo's issues. Munt's strength and brutish ways, however, proved useful to Janzo and they began working together whenever Janzo left the Outpost, as Janzo required security due to his lack of fighting skills.

The brothers grew closer over time and it's clear how deeply Munt cares for Janzo. Their vastly different personalities balance each other out, with Munt being the strength behind Janzo's intellect. They also work together whenever they are serving food or drinks at The Nightshade Inn, each doing so in their own meaningful manner and sometimes even complimenting each other. When Munt was infected by The Hive, Janzo was devastated at the loss of his brother's free-will and ability to make choices.

Janzo wanted to save Munt by injecting him with the last dose of ficter's sap but used it on Wren instead. Munt was ordered by Yavalla to kill Janzo and his friends, but Janzo intervened by stepping in front of Talon and loudly shouting Munt's name. This was enough for Munt to freeze in place and allow his brother to escape. While escaping, Janzo promised his brother that he would find a way to cure him. When The Hive was destroyed, the brothers are happily reunited, and continued to make The Nightshade Inn a lively place until the Prime Order passes the law of making and consuming of alcohol. After Janzo reveals that he is going to be a father now that Wren is pregnant, Munt grabs his brother in for a hug and is ecstatic for both his brother and himself; as he's going to be an uncle for the very first time.

Tobin and Munt can be considered adoptive cousin; Munt was adopted by Elinor Chadwick, whose half-sister Gertrusha, raised Tobin. When Tobin first arrived in Gallwood, he didn't get along with Munt, as the former was obnoxious and the later was oblivious to the other. As circumstances forced them together, Tobin grew to understand the brute's usefulness. When Rosmund asked Tobin to bring an army to the Outpost, she told him to find Munt, as she would be able to help him sneak out of Gallwood. While Munt showed Tobin the secret passage out of Gallwood, he was reluctant to bring Tobin to Aegisford. He didn't want another war after the traumatic experiences he endured after the battle against the Prime Order a few months prior. He couldn't bury another body or lose anyone else. Tobin understood and appealed to Munt's emotionally by using flattery, which won Munt over.

As they traveled to Aegisford the two share their childhood experience and how they feel about the future with each other. They also sing songs, come up with different nick names for Munt, and hunt a wild boar together. Afterwards they have to escape being chased by the Lu-Qiri, Vikka. When they finally get to Aegisford, Tobin consults Munt about his dilemma about Falista. Munt agrees that neither choice is good, but says that saving Rosmund is the most important thing. Happy to hear his friend's advice Tobin marries Falista with his friend in attendance. Later on after being freed from The Hive control, Munt is serving his cousin drinks at The Nightshade Inn and witness the talk/fight between Tobin and Falista. When Tobin was resurrected by Two and crowned King of the realms, he requested Munt to be his valet. Munt was tasked with helping Tobin bathe, fetching ale even though it was outlawed by the King and Queen, and lend advice to Tobin. Munt was touched to learn that Tobin trusted his opinion enough to advise the King. Munt was greatly sadden by his cousin's death as Tobin was one of the only few people that see him more than just a giant bumbling fool. So much so that he wants to avenge him. When facing of against Levare, he would say "For Tobin" indicating that he knew she was the reason why his cousin was killed.

Munt has romantic feelings for Warlita following the time they spent together at The Nightshade Inn as co-workers. He was worried about her safety when she was taken by radical religious fanatics and helped rescue her. Warlita seems to reciprocate these feelings as she stopped Jaaris from harming Munt with his Kinj by agreeing to serve him. Every time Warlita has gone through some emotional event he always helps calm and reassure her by wrapping his arms around her. Munt tried to go all fancy on her when out on a date, only for him to make a complete fool of himself. After heavily drinking the next day, Warlita says they next time they should just have simple things on their date. When Munt was injured during one of the against The Seven, Warlita was so worried for him. So much so that she was willing to do all the work in the Nightshade even after he had fully recovered. While evacuating The Outpost for the final battle against The Seven, Munt decided to stay behind to not only watch over his little brother, but to also avenge the death of King Tobin. This causes Warlita to kiss him for the first time and makes him promise that he will return to her. After The Seven were defeated, the two officially became a couple. After the wedding of Talon and just before her crowning Warlita ran up to Munt and kissed him for a second time. Talon believes that Munt and Warlita look good together, and compares them like her and Garret Spears. 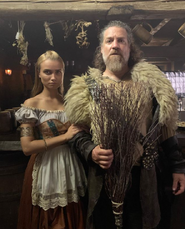 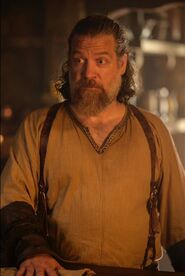