Scout of The Seven

Leader of The Kahvi (formerly)

The Pleasing Voice of the Masters

Levare was one of the seven Gods who was awakened from her slumber by her companions. She sought to unlock Skevikor with the help of her siblings.

Similar to that of her companions Tera, Vorta, Aster, Janya, and Kultor, Levare ruled over the Kahvi in the Plane of Ashes until their world was nothing but ash and dirt. The seven gods brought their people to the Green World, at which point, Aster betrayed the group by caring about humans. The rest of the Gods unanimously decided that the object of Aster's affection had to be killed, sending Golu to manipulate a woman into stabbing her human offspring. Aster intervened and stopped Golu, and shortly after, the Gods' are recorded in history as having left the Green World while Aster remained to walk amongst the Blackbloods. In reality, Levare was separated from her life essence and put to sleep in a sarcophagus. She resided in a tomb within The Capital, beneath The Three's champers, inside a tomb that she shared with Janya and Kultor.

In The Pleasing Voice of the Masters, Levare is awakened from her unconscious state with the return of the Levarekinj, an act that is made possible by her companions. She discovers that she is the fifth god to be awakened, following that of Vorta, Tera, Janya, and Kultor. She greets Janya with a sultry look, and happily takes her place amongst her companions. She learns that the betrayer is still asleep, and they plan to travel to awaken Golu next.

Like her companions, Levare has no regard for human life or the world they reside in. She views it as just another place that her people have been brought too. She is loyal to her companions and was infuriated by Aster's betrayal, holding that grudge for thousands of years as she lay slumbering in her sarcophagus. She is poised, collected, and calm, able to present the facts to those around her. She was also somewhat impatient as she had a tendency to strike first before assessing her surrounds. Because Levare possesses the ability to teleport anywhere in the green world, she is often the focal point for the rest of the Gods, relaying messages or locations back to them. She is quick on her feet and often teleports away from a fight rather than finish it alone, despite being capable of fighting. She also likes to taunt her opponents during her fights, either as a way to throw them of balance or to amuse herself.

Levare is a tall woman with a slim build, strong physique, and dons the regalia of the Kahvi. She has an oval-shaped face, dark brown hair that is pulled away from her face, and strong cheekbones. Her forehead holds the yellow Levarekinj, and on either side starting at her eyebrows, are black horns that are sharp on the edges. These clusters stop at her hairline. She also has two distinct lines under her cheekbones, and horns by the sides of her face. She has to additional horns on her chin, that are larger than those on her face. She has black ears that appear to be decayed, with a large point on the tips that almost bends over. She has black-tipped fingers and black nails. She also walks with a staff that has her kinjes symbol engraved on it.

As a God, Levare has extremely high resistance to physical attacks, is connected via a Hive mind to Vorta, and is exceptionally skilled in fighting. As the originator of the Levarekinj, she holds the ability to teleport anywhere in the green world. She uses this power frequently in battle to avoid offensive attacks and gain the upper-hand against her enemy. She can vanish without a trace and reappear seemingly out of thin air. 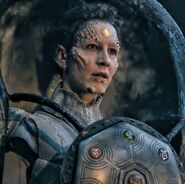