The Outpost Wiki
Register
Don't have an account?
Sign In
Advertisement
in: Cast, Main Cast, The Outpost

Jessica Green is an Australian actress who portrayed Queen Talon in The CW series, The Outpost.

From a young age, Jessica expressed interest in the film and television industries. She began her career as a model. She was discovered as an actress when an Australian casting director reached out to models for auditions. She booked the role of 'Kiki' in Lightning Point/Alien Surf Girls. She has since had small parts in films such as Peter Pan and Aquamarine. She starred as Cleopatra in the second season of the Netflix original series, Roman Empire. She also appeared in the cult-classic film, Pirates of the Caribbean: Dead Men Tell No Tales.

In 2018, Jessica landed the worldwide search for the lead role of 'Talon' in The Outpost. She submitted a tape of herself to the producers that included her acting, and an additional tape of her doing MMA. The producers wondered if she could do sword-fighting, and the next day she sent a video of her sword-fighting. After reading the script, Jessica knew that the role would require weapons training, and recorded her first lesson with a professional. According to Jonathan Glassner, the stunt team was surprised at how well she did for her first lesson.

The Outpost marked her first major role in the US as her previous filmographies were in Australia. The role capitalizes on Jessica's love for action with her mixed martial arts, horse riding, weapon skills, and athletic abilities enabling her to also do her stunts and thoroughly embody the strong female character. She learned boxing, muay Thai, and trains at a mixed martial arts gym in Australia.

While on set filming Season 4, Jake Stormoen met a stray dog that was roaming the set. The one dog turned out to belong to a litter of stray puppies, who had taken housing in the sets. Jessica fostered two of the puppies. 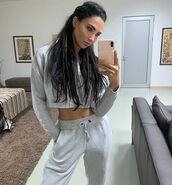 Jessica Green on What's New for "The Outpost" Season 2