The Janyakinj is the soul and power source of the god-like being Janya. This green-tinted kinj gives its host the ability to absorb life forces and transfer it to deceased individuals. It follows the natural order of the world - a life for a life. The kinj's power is reliant on how many lives it absorbs and how long the individual has been dead for. The Janyakinj is one of the seven original kinjes. It was destroyed along with Janya.

The kinj was initially created with the soul of Janya, a God-like creature, inside. Hundreds, if not thousands, of years ago the shrine Vor-Anden was built by ancient Blackblood warriors. It stored the seven kinjes that were given to the Warriors of Old. The Janyakinj was one of the coveted seven and was presumably gifted to a Blackblood warrior. It would eventually come into contact with Two, who would use the power to form a fanatical group called The Three. Together, The Three overthrew the Royal Family and were able to rule over the realms with fear due to the power of their kinjes. The Janyakinj, though less volatile then its companions, served as needed tool in The Three's rule.

When the Tormentor went too far in his beatings of Garret Spears, the healer Sana brings Garret's corpse to The Three and asks Two for her help in bringing back Garret. Two obliges and resurrects Garret using a previously stored life force. The Three are later overthrown by The Hive and imprisoned in the cells of The Capital. Talon and Garret discover Two while planning a siege, and learn that she can resurrect people. They broker a deal with her; Two will resurrect Gwynn Calkussar and Tobin Aegisford if Talon agrees to free Two. The pair accept the deal and kill the Queen and her King-to-be, freeing them from The Hive. Two successfully revives Gwynn using the life of a dying man. She repeats the process with a haggard prisoner to revive Tobin.

Two and her kinj don't resurface until after the final battle against The Hive, where she offers her services to the new Queen - Falista Relman. Two will resurrect Tobin using the lives of 20 Relman soldiers if Falista agrees to join The Three now that she possesses the Kultorkinj. Falista sacrifices Relman and Aegisford subjects to resurrect her husband.

The Janyakinj can't survive outside a host's body. The creature wants to survive like any other living thing, so if the host dies the kinj can leave the host and find a new one.

The consequence of such a power is the mantra "a life for a life". In order for one person to be resurrected, another be sacrificed in their place. The absorption of a life force also leaves behind a circular marking on the victims foreheads. This indicates that the victim can not be resurrected by the Janyakinj, and have suffered the loss of their life force. 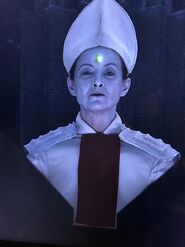