The Outpost Wiki
Register
Don't have an account?
Sign In
Advertisement
in: Cast, The Outpost, Main Cast

Jake Stormoen is an American actor who portrayed King Garret Spears in The CW series, The Outpost.

Jake began his work in the film and television industry in short films and videos. He continued to have small roles in television series such as Lucky Days and Relationship Status. His first recurring role was as Duncan in Extinct. In 2014, Jake reached his breakout role as Dagen in the five-part fantasy film, Mythica. He later created Storm Forged dice, a line of tabletop gaming dice, in collaboration with Die Hard Dice.

In 2018, Jake booked the role of Garret Spears in The CW series, The Outpost. The role especially cemented his love for fantasy and period pieces. During filming for the fourth season of the series, Jake found a stray dog wandering the sets and took the dog under his care. He posted about the pet on social media that he was conflicted about what to with him, as the dog is too cute. He ultimately decided to keep the dog, naming him Indy, after Indiana Jones. 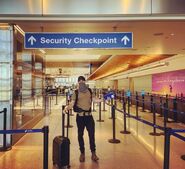