The Outpost Wiki
Register
Don't have an account?
Sign In
Advertisement
in: Cast, The Outpost, Main Cast, Crew

Anand Desai-Barochia is a British actor who portrayed Janzo in The CW series, The Outpost. He also served as an associate producer for Season 3 and beyond.[1]

When Anand was sixteen he auditioned and got a full scholarship to the Italia Conti Academy of Theatre Arts in London, the countries oldest acting academy. From there, he worked in London for a while and then came to the United States in 2010 to study at the Lee Strasburg Theatre & Film Institute. While most of his acting roles were in the comedy genre such as Skins and Emmerdale.

In 2018, Anand booked the role of Janzo in The CW series, The Outpost. He was initially meant to auction for the role of Garret Spears, but as he was reading the script he kept reading lines from Janzo. What drew him to the role was Janzo's brilliance and complexity. He spoke with his manager about auditioning for Janzo instead, which surprised his manager as "Garret" is the "leading man". Anand knew that Janzo was the character he truly wanted to play. After being cast, Anand came up with the idea for Janzo's posture, the way he would speak, and even move. He also enjoys the freedom of improving on set.

On October 7, 2020, it was announced that Anand had been promoted to an associate producer for the series. 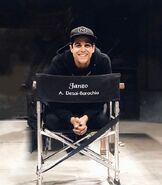