A Life for a Life

A Life for a Life

A Life for a Life is the third episode of the third season of The CW's The Outpost. It aired on October 22, 2020.

LIFE OR DEATH – Talon, Wren, Janzo and Yavalla fight to survive as they search a labyrinth for an ancient relic. Gwynn and Zed fight for control of the Outpost. 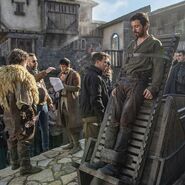 The Outpost Season 3 Episode 3 What's Down There? Scene The CW